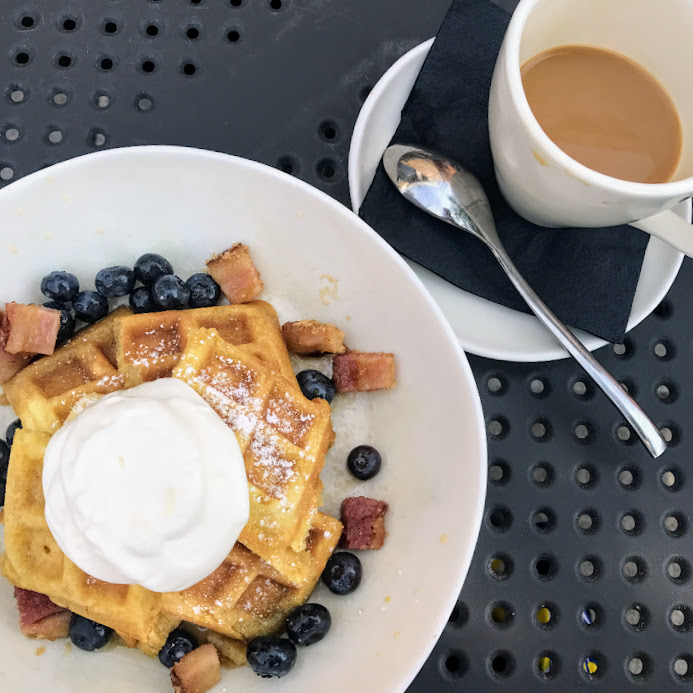 While I was sad to see the Wicker Park location of Jerry’s close last year (the endless sandwich menu overwhelmed in a delightful way), I was happy to try out its replacement. Rhyme or Reason is a gastropub that draws inspiration from retro ’70s themes, and its sprawling front patio was especially inviting on a sunny Saturday morning.

I decided to try The Hop Mess, brand new to the menu as a month-long collaboration with Revolution Brewing. Both the waffle batter and the maple syrup were (very) heavily infused with Revolution Brewing’s Sun Crusher, a new seasonal wheat ale that was already a favorite of mine from earlier in the summer. Together with blueberries, candied bacon, and whipped cream, the hoppy malted waffles really worked (especially with a cup of coffee for balance). 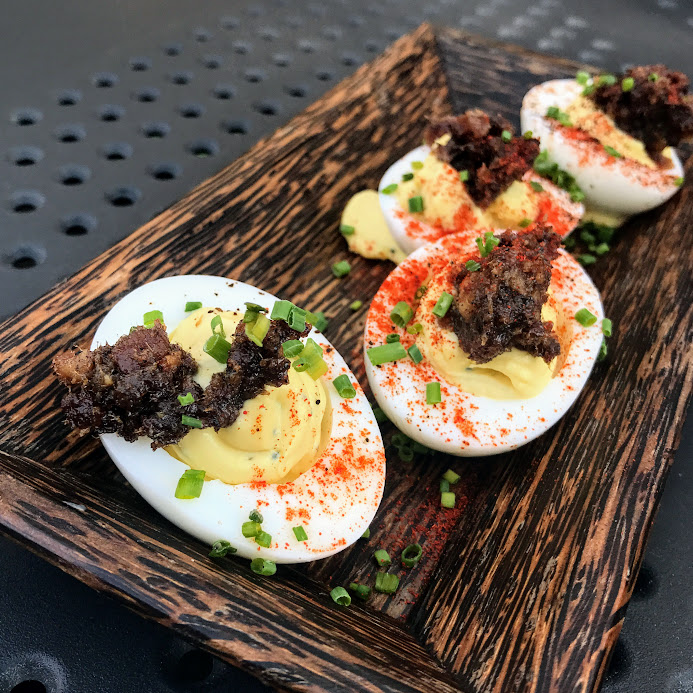 My friend and I also snacked on these deviled eggs before entrees arrived. A sticky smear of espresso-bacon jam on top of each creamy egg set the sweet-and-savory brunch tone. And while the patio was great, I’d easily return in cooler weather to challenge someone to a game of giant Connect Four in the lounge area next to the colorful bar. 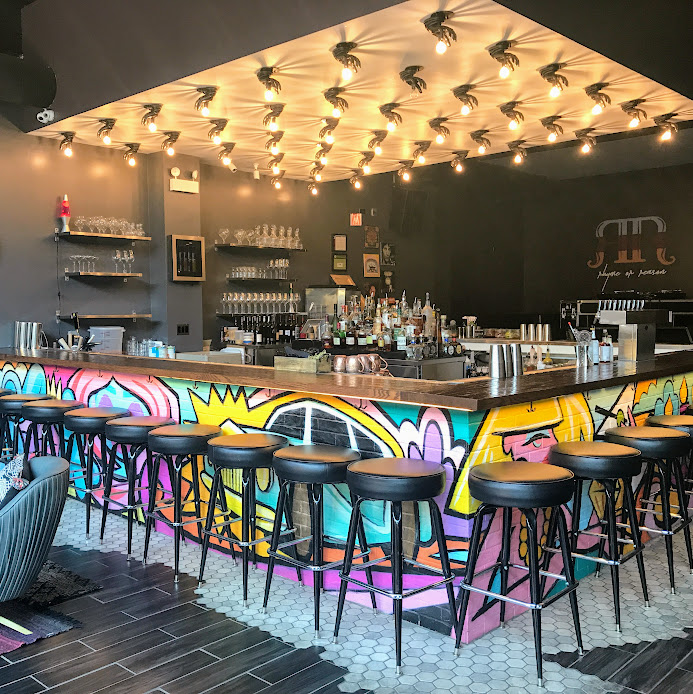 Travel Eats documents my food adventures outside of Chicago.

While in New York, there was a lot of other eating to do outside of our Restaurant Week reservations. First off, in such a bagel-centric city, breakfast was a high priority. I was especially awestruck by Russ & Daughters, a smoked fish mecca that’s been around for 100 years, but that I hadn’t visited until this trip. The pastrami-cured salmon combined two potent New York flavors into one unforgettable bagel topping, only enhanced by a slick of horseradish cream cheese. I can’t wait to go back and taste more kinds of fish! We also stopped at legendary Katz’s Deli (you may remember it from When Harry Met Sally or Enchanted) – since it was a little too early in the day for a sky-high sandwich, we settled for a simpler snack of latkes with applesauce and sour cream.

Interior at the legendary Katz’s deli, including the “When Harry Met Sally” sign

In pursuit of pizza, another important New York food group, we ventured out to Roberta’s in Brooklyn. Both pies we tried were sublime, with bubbly, charred crusts and perfectly melted rounds of fresh mozzarella. The duck prosciutto with crusty bread had a nicely subtle richness as a starter. On the other end of the spectrum, I couldn’t resist inducting my friends into the late-night tradition that is 99-cent pizza: a piping hot, classic NY-style slice that might be the best value in Manhattan. It’s served at locations all over the island, and was a staple for my roommates and me when we lived there.

And then there was brunch at The Spotted Pig, Chef April Bloomfield’s ultra-popular West Village gastropub. I went for the sizzling sisig special, traditionally a Filipino dish made with diced-up pig face and an egg added in the middle. It was crispy, porky, garlicky, and a little over-the-top, but so delicious. All I wanted were more bread crisps to dip into what was left in the cast-iron pan. The deviled eggs made a zesty first bite, especially together with a Bloody Mary that was heavy on shaved horseradish.

Speaking of drinks, we came away with a few other favorite places to imbibe. My Calle Fresca margarita at the Meatpacking District location of Dos Caminos was pleasantly tropical with a punch from the ancho-salt rim (I also loved their chips and salsa). We were also seeking somewhere cozy for a glass of wine in Midtown East, and Cello Wine Bar fit the bill. Exposed brick, red-toned cushions, and lots of candles – and, of course, diverse by-the-glass options that we all enjoyed sipping.

This is part of a series of posts about my vacation to Portland, Oregon, in late February 2013.

We made a bit of a mess…

When I first decided to go to Portland, Pok Pok was the restaurant that I immediately knew I’d visit. Pok Pok (a Thai slang term for a mortar and pestle) is helmed by Andy Ricker, who’s well-known in the restaurant world as an American chef who became obsessed with Thai cuisine and has stayed fiercely committed to authentically reproducing its bold, vibrant flavors in his restaurants. Pok Pok doesn’t take reservations and is known for long wait times, so we chose to go for late lunch (served 2:30–5 p.m.) to avoid the biggest crowds. Before we knew it, every inch of our cozy corner table was filled with metal dishes and serving bowls. Ranging from deliciously sticky chicken wings and succulent game hen to cool green papaya salad and curry soup with punchy garnishes, every dish struck the sour-sweet-salty-spicy balance that’s the hallmark of Thai cuisine. And the ice cream sandwich – coconut-jackfruit ice cream, chocolate, and condensed milk on a glorified hot dog bun – was a whimsical way to end the meal.

Condiments on the table

Drink list next to the bar, complete with Pok Pok’s wide selection of drinking vinegars

Sticky rice inside a basket

Grüner, on the other hand, was a somewhat unlikelier dining destination. After coming across some excellent reviews and deciding that refined Alpine cuisine might be a fun direction to take, I made a late dinner reservation. It turned out to be an exquisite meal, with the flavors of German food that were so familiar, but presented here in an exceedingly clean and artful way. The gorgeous beet-pickled deviled eggs ranked among the best I’ve ever tasted, and we both couldn’t get over how the rabbit boudin blanc and hint of mustard simply melted into apples that were sautéed to exactly the right chew. Each component of both the jägerschnitzel entree and the walnut tart dessert married the heartiness of the Old World with the thoughtful, seasonal elegance of a cutting-edge restaurant in Portland. I also was introduced to another favorite local beer, Occidental Brewing’s Dunkelweizen, which made a great pairing.

Each day in December, I’m celebrating my best bites (and sips) in 2012, posted in chronological order.

Why it’s a Best Bite: These were the first two recipes I made from The Smitten Kitchen Cookbook, the October debut from one of the very best food bloggers out there, Deb Perelman of SmittenKitchen.com. Her superbly written blog is my go-to when I don’t know what to cook, and she’s taught me the virtues of brown butter and fritters, among other delicious lessons. I made the deviled eggs for a holiday party, and loved the Spanish twist of smoked paprika and marcona almonds (though I admit that I used the bacon I had on hand instead of fancy Spanish ham). And while they may sound strange at first, the popcorn cookies made such a satisfying salty-sweet snack, especially from underbaking a little to leave the dough chewy. I was fortunate enough to meet Deb at a book signing and tell her in person how much I adored these cookies and her work.

The details: Check out the Smitten Kitchen blog, and buy the cookbook on Amazon.